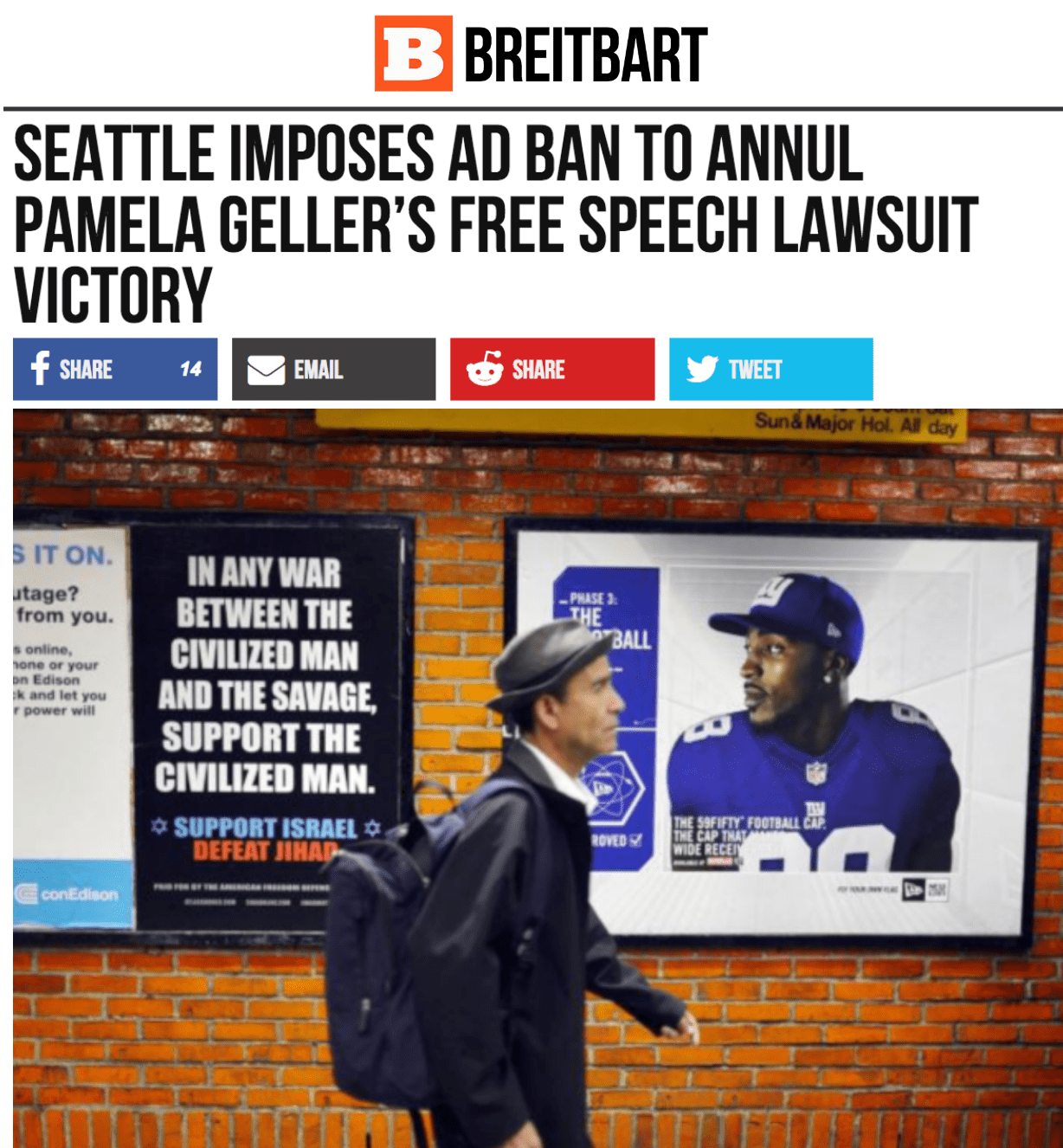 Officials who oversee Seattle’s transit system moved to ban political, religious, and other ads from its facilities and public transportation vehicles soon after Pamela Geller’s American Freedom Defense Initiative (AFDI) prevailed in a freedom of speech lawsuit against the city, earning the right to run FBI’s Most Wanted terrorist posters, Breitbart News has learned.

“People should realize that this is a struggle for the very foundation of any free society: the freedom of speech. If there is a group you can’t criticize, then that group can impose tyranny over you. If we lose this free speech battle, all our other freedoms are lost” Geller recently told Breitbart News via email.

She argued the advertisement ban sidestepped the September 2018 U.S. Court of Appeals for the Ninth Circuit ruling in AFDI’s favor, which allowed the group to advertise the Most Wanted terrorist list in Seattle.

However, the new restrictions, dubbed the “Geller ban” and instituted in December 2018 by the King County Department of Transportation’s Transit Division that oversees Seattle’s public transportation system, have ended up preventing AFDI from running the terrorist wanted ads, Geller pointed out, noting that her free speech lawsuit victory was bittersweet.

Before the appeal court’s ruling, judges had denied AFDI the right to place public service ads featuring images of the FBI’s Most Wanted Terrorists on Seattle’s public transportation system, due to a perceived disparagement of Islam.

The city’s rejection prompted AFDI to sue the King County Metro system for its suppression of free speech.

“We won the right to run the FBI wanted terrorist poster that Seattle prevailed upon the FBI to withdraw [ in 2013]. And as soon as we triumphed, Seattle transit imposed the infamous Geller ban, banning political, religious and cause-related ads in Seattle (following NY, Washington DC, Boston, Miami, Chicago, San Francisco, etc),” Geller told Breitbart News in the email.

In a document outlining the transit agency’s advertising restrictions, King County officials noted that the policy bans advertising on transit facilities and vehicles that fall within the categories of political, religious, government (except for the county’s), and other forms of “speech.”

“They banned all political ads, as that was the only course of action they could possibly take in order to continue to avoid running my ads,” Geller said. “They’re so determined to continue whitewashing Islam and denying and obfuscating the roots of jihad terror that they are willing to lose immense amounts of revenue from all political advertising.”

Transit agency officials argued that their “viewpoint neutral” ban seeks to prohibit “advertisements that interfere with and divert resources from transit operations, that detract from transit purposes by creating substantial controversy, and/or that pose significant risks of harm, inconvenience, or annoyance to transit passengers, operators, and vehicles.”

“Such advertisements create an environment that is not conducive to achieving increased revenue for the benefit of the transit system or to preserving and enhancing the security, safety, comfort, and convenience of its operations,” the officials added.

Responding to the agency’s argument Geller noted, “I see ads that annoy me all the time. If that is the criterion [for the ban], whose annoyance counts, and whose doesn’t, and why?”

She told Breitbart News that King County’s decision to ban FBI wanted posters featuring some jihadis amounts to the “enforcement of Sharia blasphemy law in another American city.”

King County officials described the transit agency’s advertising ban as“restrictions” that “foster the maintenance of a professional advertising environment that maximizes advertising, revenue, and protects the interests of the captive audience that uses Metro’s transit services.”

In other words, the county’s transportation department believes that banning certain ads will allow the county to generate more revenue.

Nevertheless, the county asserted that the advertising policy intends to fulfill the following goals:

Geller vowed to keep fighting for free speech all the way to the Supreme Court if necessary to ensure Seattle upholds the appeal court’s ruling.