“Hope and change”…remember that campaign slogan from just a few years ago?  The current Occupier of the Oval Office was going to make things all better in America and allow the planet to heal?  (The planet is constantly trying to blow itself up, whatever made the Barack Obama think he had the power to heal it?  Don’t answer that.)

Now that we are in the last year of that bold experiment in “let’s ignore all American values and traditions in order to win an international popularity contest” the mainstream mass media sorts are starting to measure just how much of a frenzy the American people are in over all the change that hope sent sideways.  Esquire Magazine (now there’s a stalwart political organ for you) published the results of a recent poll conducted by NBC regarding rage in the United States.  The results are pretty predictable, leading one to wonder just how Pavlovian the American media has become.  Take the first question:

About how often do you hear or read something in the news that makes you angry?

Anyone who lives in the world is going to get angry about something somewhere.  But what does Esquire and by extension, NBC, want us to know about this?

Hence, there is credence to the concept of the angry white, middle class, just like the narrative tells us, with one caveat:

Just exactly what are these people angry about?  The poll doesn’t really say at the top (the details are buried far enough down that busy readers will have given up looking before getting to women being more angry about billionaires buying elections than men), but does constantly report on the racial breakdown of what people think about various former propaganda memes such as “The American Dream” and “Is America the most powerful country on earth?”  (When the stock markets quit calculating their cash in dollars and the Chinese quit stealing our technology to copy it, we can ask that question.  Until then….)  The results of the survey reflect the media messaging that has been pounding the public for years.  This is how Esquire presented the findings.

What’s your sense of America’s place in the world?

Do you think the American dream—if you work hard, you’ll get ahead—is alive and well? 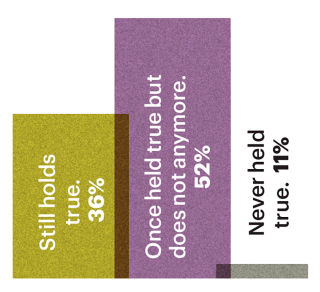 The presentation of the actual results leaves something to be desired, but the poll itself does give us an idea of just what the people of the country think about what is going on in our lives: even the people who are supposed to be lulled to sleep by a media telling them what to think.

Or are they being told to be angry about?  Consider this question:

If your were going to attend a protest, what would your sign say?

#BlackLivesMatter Is a Hate Group. 6%

Keep Your Hands off My Uterus. 12%

We Came Unarmed. This Time. 6%

We are then told that Republicans answered “Taxed Enough Already,” “Make English America’s Official Language,” and “Abortion is Murder.”  Just what the people have largely been instructed to say, although those three sentiments are true for those who are conservative.

When it comes down to it, this NBC poll as presented by Esquire does demonstrate that Americans are angry and that we have probably been led to the water of being so.  Much of what is presented is class envy and racial divides exploited.  There are no great surprises, but the concept that Americans are angry when we were supposed to be so enamored of hope and change is what reverberates.

For more on this topic, visit American Thinker and The Washington Times.

A resident of Flyover Country, Cultural Limits is a rare creature in American Conservatism - committed to not just small government, Christianity and traditional social roles, but non-profits and high arts and culture. Watching politics, observing human behavior and writing are all long-time interests. In her other life, CL writes romance novels under her nom de plume, Patricia Holden (@PatriciaHoldenAuthor on Facebook), and crochets like a mad woman (designs can be found on Facebook @BohemianFlairCrochet and on Pinterest on the Bohemian Flair Crochet board). In religion, CL is Catholic; in work, the jill of all trades when it comes to fundraising software manipulation and event planning; in play, a classically trained soprano and proud citizen of Cardinal Nation, although, during hockey season, Bleeds Blue. She lives in the Mid-Mississippi River Valley with family and two cute and charming tyrants...make that toy dogs.

BREAKING: Disturbance At The White House Locks The Place Down

Environmentalists Celebrate After Keystone Stall…Uh, Yeah, About That “Victory”

Researchers May Have Found The Secret To Weight Loss

WE NEED A WALL: Have You Heard What The Mexican Cartels Did To The Border Fence?